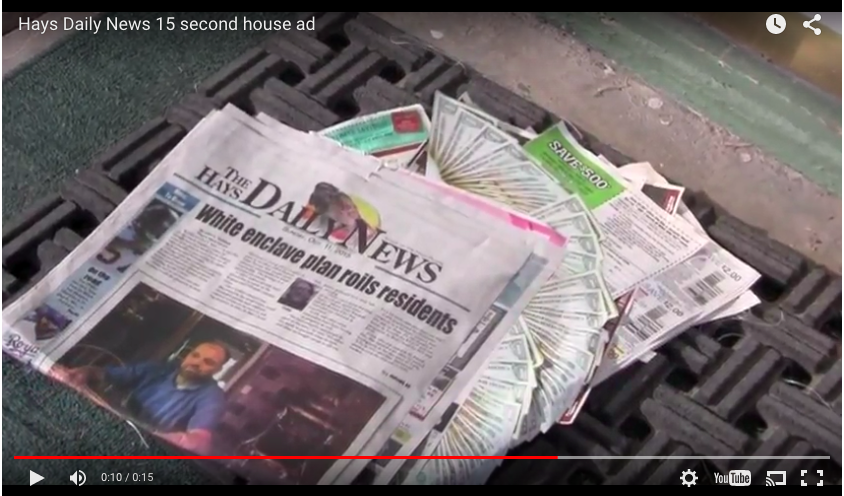 The Kansas Press Association had its annual convention and awards banquet the weekend of April 23, and my newspaper brought home a good amount of awards. It wasn’t enough to win the overall sweepstakes award in either news or advertising, but at our own little ceremony this morning, our publisher said any time he had to search for a bag to bring home the awards, we’ve done well.

(Congrats, by the way to our sister paper, The Garden City Telegram on their news Sweepstakes award. We’ll get ya next year, Scott.)

For my work that I submitted, I received a total of seven second- and third-place awards. Four of those are shared with co-workers. I’m pretty happy with that.

I think this is the one I am most happy about — third place for Best Online Promotion for my subscription video.

This was a fun one to work on and my co-designer, Mallory Goeke, and I received third place, Best House Ad.

This one received  second place in the Best House Ad category. Both of these were done for our Business Card Directory.

This was a fun one to work on, too. I received third place in Best Online Ad (Motion) for it.

For this one, Sales Representative Eric Rathke and I received second place in Best Online Ad (Motion)

Today my boss and our publisher went to a nearby town to help out the weekly newspaper staff with some ideas to revitalize their biz. Sounds like they had a lot of ideas to offer. Seems like a good thing for us to do — it can help strengthen both of us. Will write more on this as it evolves.

For three years now, I have helped put together The Hays Daily News’ Veterans Day tribute. I’ve gotten to know many of the faces that appear there — more than 400 of them. Some I know in real life, albeit an older version.

Most are from WWII, but there are some from just about every era, including WWI and those currently serving. We’ve even had one or two from the Civil War before.

Some of the photos are faded, fuzzy or well-worn, creases showing they’ve been carried in wallets for years. Others are new, sharp and clear. In some of the youthful faces you see eagerness. Some are battle-weary. Others appear uncertain. A few show a spirit of fun — hats a rakish (or maybe tipsy-on-leave) angle. Some make you laugh, some make you cry.

But there is something you can see in the eyes of all — pride in serving their country.

It’s very humbling to do this project. Every year, veterans or their family members bring in photos for us to scan so they can be included (It’s kind of heartbreaking when they have missed deadline and we can’t include them. But we do save them for the next year.) Some ask how much it costs to have their picture in the section, and are surprised when we tell them nothing (thanks to sponsors). They bring in photos of their brothers, fathers, sisters, mothers and daughters to be included too. Some have stories they share with us.

You can tell for some — especially for those who are now old men — it’s hard for them to come here and ask to be included. They don’t necessarily want to be recognized for what they felt was just doing their duty to their country.

But they are glad someone does. You can see it in their eyes.

Cover for the 2014 graduation section for local private Catholic school.

It’s not often we design logos at the newspaper — usually the clients have already taken care of that aspect of their business. But once in a while, we get the chance to try our hand at it. Here are a couple I got to do recently, and another I enhanced for print.

This one is for a small bakery in a nearby small town. 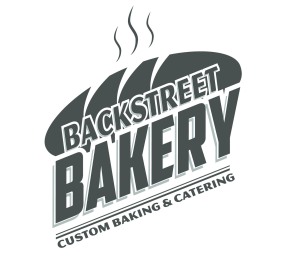 A mall in our town underwent some renovations and changed their name to “plaza” rather than “mall.” They never really redid their logo, so for an annual ad they run featuring all their stores, I put this together. I pulled the colors from a photo of their new main entrance.

The client actually had created this logo, but it was hand-drawn and given to us on a photocopied grand opening flyer. I scanned it, brought it into Illustrator. I then used the live trace and live paint features to turn it into a vector and to enhance it. The logo still has the client’s hand-drawn feel but has a much better appearance in print. 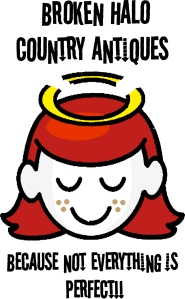 My Tweets
My Tweets

There was an error retrieving images from Instagram. An attempt will be remade in a few minutes.